The Ontario government recently announced new measures to fast-track the environmental assessment for Highway 413, a proposed 400-series highway, also known as the GTA West highway. This would mean faster construction of a $6 billion mega-highway from Vaughan down to Milton that we don’t need. 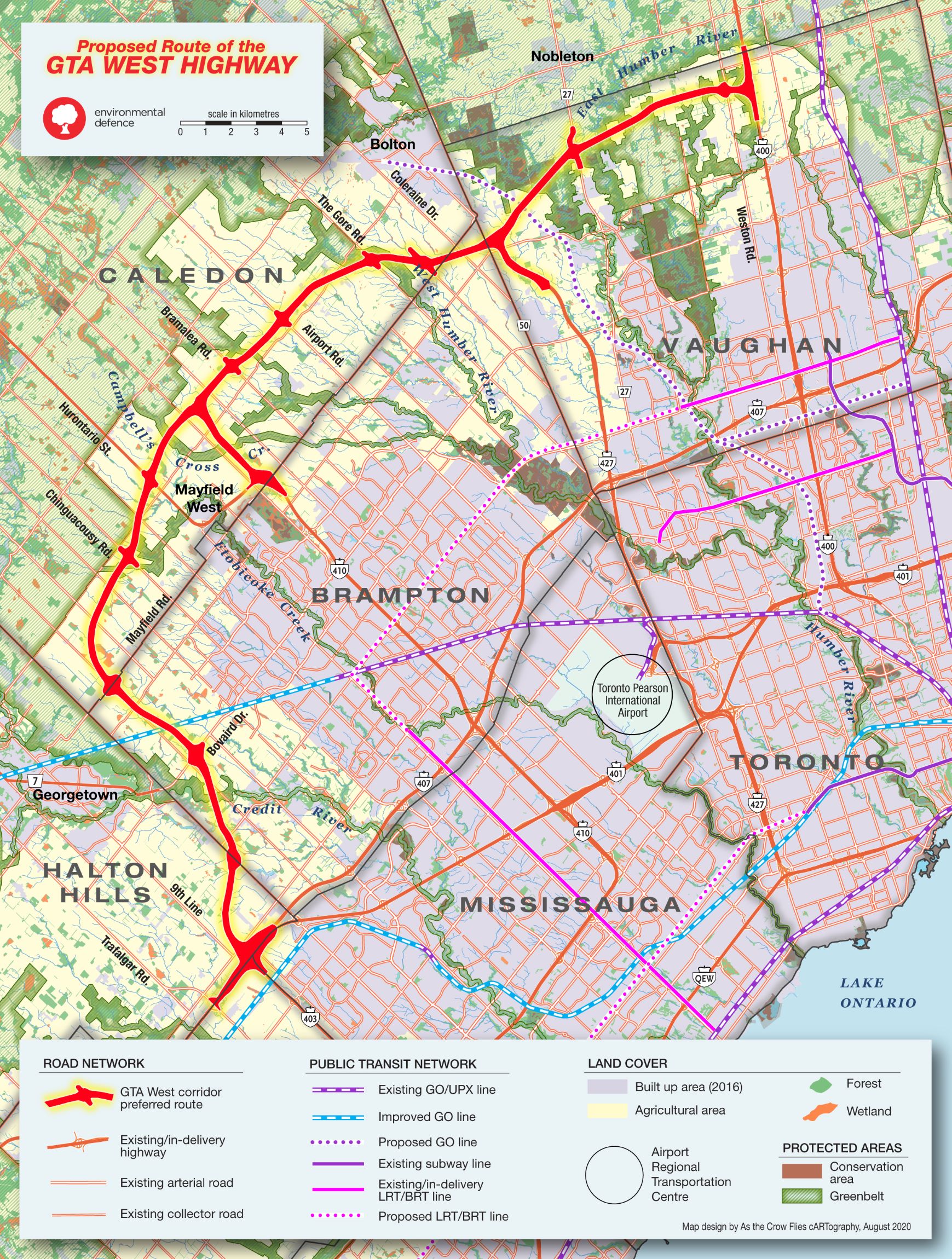 The Province claims building this highway will help with Ontario’s economic recovery from the pandemic. But this controversial highway was revived against expert advice before the pandemic started. What they’re actually doing is pushing through a destructive project under the guise of COVID-19 recovery.

Tell the Province not to fast track approvals for Highway 413

Here are our top 6 reasons not to speed up construction of Highway 413.  You can find out more in our recent report on why the highway should not be built.

An expert panel appointed by the provincial government determined in 2017 that “a proposed highway in the GTA West corridor is not the best way to address changing transportation needs.” Their results can be found here. Modeling showed that the proposed Highway 413 would save drivers a mere 30-60 seconds per vehicle trip.

The panel made a number of recommendations for how to get traffic and goods moving without building the highway. In 2018, the provincial government took the panel’s advice and shelved plans for Highway 413 instead looking to alternatives like improving GO service to the GTA West corridor, improving cycling infrastructure, and other transportation options more in line with Ontario’s plans to fight climate change, protect green spaces, and reduce air pollution.

2. This highway will destroy important green spaces and prime farmland.

The corridor needed for HIghway 413 would be 170 meters wide and about 50 km long. It would rip through the Greenbelt in Vaughan and across the Whitebelt in Caledon and Brampton. The highway would have massive impacts on natural areas such as rivers, valley lands, wetlands, conservation areas and forested areas, including approximately 53 river and stream crossings, and prime agricultural lands, including about 1000 hectares in the Greenbelt in Vaughan.

But the government wants to start work on the highway before the environmental assessment is even finished. And they are proposing to start with bridges – which would go through some of the most sensitive areas along the route, where the highway crosses streams, rivers, and other natural features. A 400-series highway through important green spaces is not the kind of project that should be exempted from key parts of an environmental assessment.

This highway would also help developers unlock land to build sprawling subdivisions along the route. This will mean McMansions in green spaces instead of more density where services like transit and water pipes already exist. Aside from shaving less than a minute  off commuting time, it’s unclear how spending billions of taxpayer dollars will actually help anyone but sprawl developers.

Building a new highway gets more polluting cars on the road, and usually does nothing to relieve congestion over time. If you build more roads, more people decide to drive. This phenomena – called induced demand – has been well-documented in highway projects around the world.

Building the Highway 413 will mean more greenhouse gas (GHG) emissions from vehicles. At a time when vehicles are already the biggest source of carbon pollution in Ontario, this will make climate change worse. 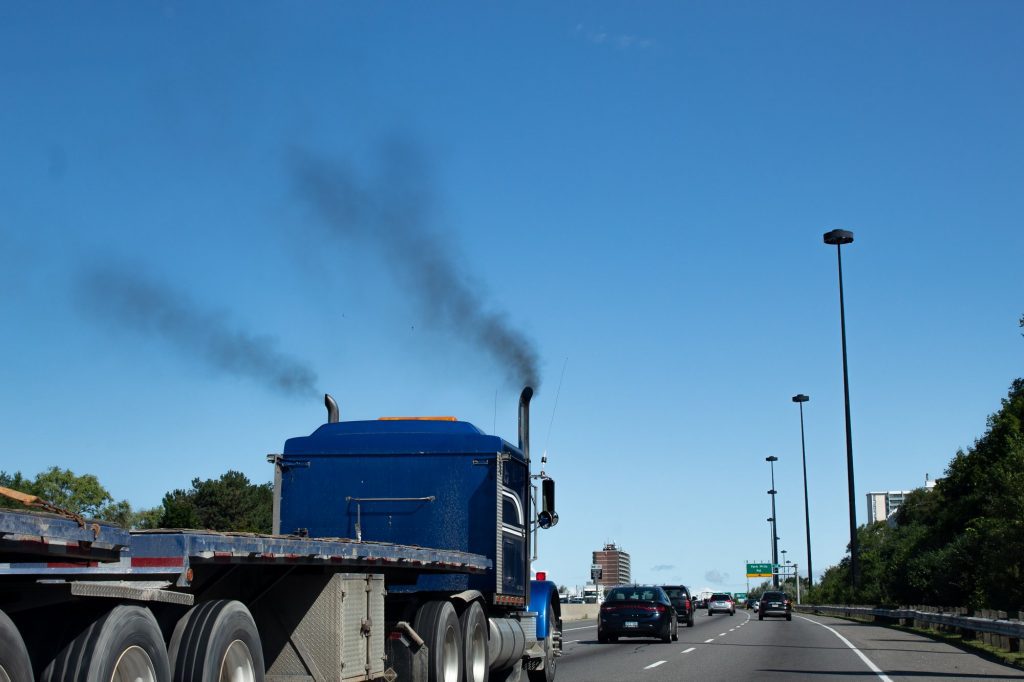 4. People who live along the highway route will breathe dirtier air and suffer health impacts once the highway is built.

Peel Region is already a hotspot for air pollution from vehicles, and that this pollution is worst near highways and interchanges. People who live close to highways suffer greater health impacts from air pollution, and will experience higher risk of diseases like asthma, lung cancer, childhood bronchitis, and other cardiovascular issues.

We need more information about how much this highway will harm the health of residents who live near the proposed highway before racing forward with construction. In fact, public health groups recently requested a Health Impact Assessment for the highway. The Province has not committed to doing this, but it would be a smart move before starting construction.

5. We need time to consider alternatives to the highway

The Province’s expert panel determined that alternatives to Highway 413 were a better approach to accommodate transportation in the growing region. Alternatives like Light Rail Transit (LTR) and GO expansion would help serve a rapidly expanding region where transit ridership is on the rise, and many proposed projects are still unfunded (for example, Brampton’s Hurontario LRT extension). Ideas like giving trucks priority on the 407 would also help ease pressure on existing highways and speed up goods movement. These alternatives would also provide economic stimulus and jobs.

On top of this, we still don’t know the lasting impact the pandemic will have on commuting patterns as more people work from home. Rather than racing to build a new highway, it makes more sense to explore emerging travel patterns which will impact future transportation needs.

After seeing how Highway 410 divided communities in Brampton, the city is proposing an alternative to the 413, As Highway 413 would go through one of the last undeveloped parts of Brampton, the City Council approved a plan to create a walkable, cycleable, 20-minute community based around a boulevard, instead of highway – a creative alternative to the destructive 413.

6. The $6 billion needed to build the highway would be better spent elsewhere

We face a critical choice with Highway 413. Do we sink $6 billion of taxpayer money into highway infrastructure that may become obsolete due to rapid changes in transportation or business technology, such as shared mobility or more people working from home, or do we instead invest in public transit and active transportation projects?

We have an opportunity to cut GHG emissions and air pollution, improve commutes, and protect important green spaces by saying no to Highway 413 and backing the alternatives. Let’s listen to the evidence we have and take the time to build back better.