Seven facts Canadians should know about climate change and forests

Last year, Canada’s federal government made an important and exciting announcement – in the next decade, we will plant over 2 billion trees to help fight climate change. While this announcement made headlines across the country, it’s just one part of a larger conversation on the role that forests and other natural ecosystems can play in tackling climate change.

But while changing how we protect and manage land is important and can help us deal with climate change, it can’t possibly do all the work. I want to say this at the outset –

both solutions are needed, but reducing fossil fuel usage is even more important for climate change than fixing our forest management practices.

Still there are very good – too often overlooked – reasons to include what are known as nature-based climate solutions in climate change action plans.

Here are seven things that Canadians need to know about climate change and forests and, more generally, nature-based climate solutions.

All plants, from moss to trees, absorb carbon from the air as they grow. Trees “breathe”: carbon in, oxygen out. It’s not just in the trunks, branches and leaves of trees. In some forests, like Canada’s boreal forest, the soil beneath the forest stores more carbon than all the above ground vegetation.

And that makes forests gigantic vaults that hold a lot of carbon.

You likely know the Amazon rainforest is important for both its astonishing biodiversity and carbon storage. And yet one square km of boreal forest holds twice as much carbon as a square kilometre in the Amazon. In total, the carbon held in the boreal holds 100 times Canada’s current annual emissions.

But if forests are like bank vaults for carbon, then we need to keep our eyes on the deposits and withdrawals – i.e. the carbon that is either absorbed or released.

When a tree is cut down, it releases the carbon it has stored.  When we cut down trees, some carbon from the trees and the soil is released immediately, and carbon continues to be emitted as the forest product decomposes: quickly for products like toilet paper, much more slowly for solid wood products.

Multiply that by an entire forest being cut down, and that leads to a significant amount of carbon going into our atmosphere.

It may be surprising to many Canadians, but our forests, including the boreal, have been net emitters of carbon for close to two decades. That’s because industrial operations like forestry and oil and gas development continue to cut forests, including old growth forests, which store a lot of carbon. This is especially true for intact forests – which have not yet been significantly altered by human activity.

And warmer, drier conditions brought on by climate change have resulted in larger and more intense forest fires and insect infestations. As those trees go down, still more carbon is released.

A forest can be destroyed—permanently cut down to make way for suburban development or agriculture or some other use. Or it can be degraded, made less productive and resilient due to industrial development. Both release carbon that speeds up climate change. Restoring degraded forests allows more carbon to be absorbed, boosting our carbon bank account and helping us limit the extent of climate change.

So far I’ve only discussed forests. But there are other ecosystems found in Canada that are important in addressing climate change too: wetlands (including peatlands) and grassland. 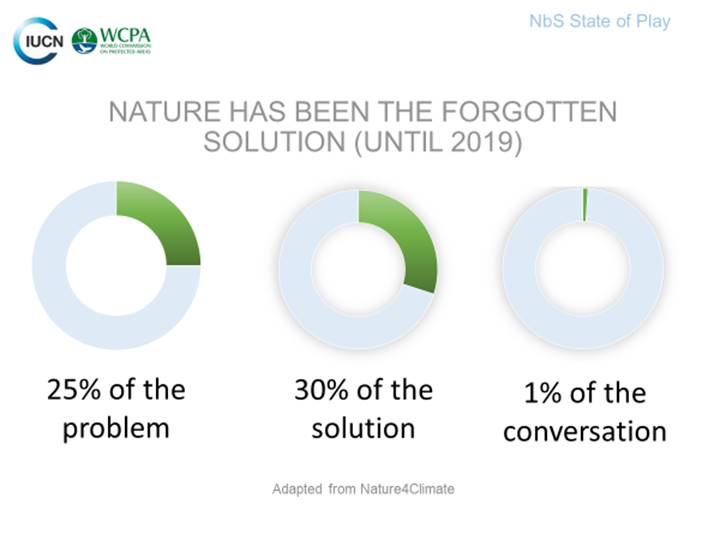 What is the “solutions” part of nature-based climate solutions?


So far, we’ve looked at how landscapes and climate change interact – but what should Canada be doing to ensure that our forests are part of the solution to climate change?

Taken together, forests, other ecosystems, and agricultural land have a tremendous potential to help fight climate change, by reducing the amount of carbon in the atmosphere. A global study found that these landscapes could provide more than one-third of the climate action needed to limit warming to 2 degrees Celsius.

But in order to unleash this potential, we have to change the way we manage those lands. Important changes include:

Other research focusing on the U.S. had very similar findings. Nature-based climate solutions had significant potential if nature was protected and activities that damaged ecosystems and agricultural land were reformed or curtailed. (The same academic researchers are doing a Canadian study that should be published soon.)

Protecting forests helps our climate, but will also help us – and wildlife – adapt as the climate changes

What these and other studies also showed is that changing the way we treat ecosystems and farms creates valuable benefits that go beyond climate change and carbon emissions. There is significant overlap between natural areas that hold a lot of carbon and natural areas that have healthy ecosystems. If we preserve these landscapes, we get both.

Intact ecosystems that haven’t been degraded by logging or other industrial activities are also more resilient to climatic changes that have begun already, and will ramp up over time. Animals and plants can survive better within large tracts of natural landscapes, especially as temperatures warm and precipitation patterns change.

Nature can also play a role in human adaptation. For example:

There are many more examples of “green infrastructure” that should be considered when municipalities of all sizes are making decisions about needed infrastructure.

So, will planting 2 billion trees help? What other stuff should Canadian governments  do to help nature along?

The Canadian government’s commitment to plant two billion trees over the next ten years is potentially a great initiative that could provide multiple benefits. However it is vital that it is done right. And that means planting the right types of trees in the right places for the right reasons. Planting diverse species of native trees, rather than just one species, can make those trees or forest more resilient to future climate changes, including insect infestations and fire.

A federal offset system is also being developed this year. Offsets can allow projects that increase stored carbon in forests or on agricultural land to receive carbon credits that can be sold for money or counted against other polluting activities. In particular Indigenous-led conservation initiatives have been shown to be successful at increasing stored carbon and protecting biodiversity, and so it makes sense to give incentives for these projects and activities.

However, if offset rules are lax, they can allow different degrees of greenwashing. Some projects might store less carbon than they get credit for and have a negative impact on both climate change and biodiversity. Offsets are often used by polluters such as oil and gas or manufacturing companies to meet climate regulations, so badly designed offset rules can undermine climate action in Canada.

Nature-based climate solutions such as preserving forests and improving agricultural practices have a role in limiting climate change. But they couldn’t possibly do all the work. Reducing fossil fuel usage is even more important. Continuing to use fossil fuels will just dig the hole deeper and deeper and deeper, no matter how many trees we plant.

Sure, every country including Canada has to improve its policies on forestry, protected areas, and agriculture. BUT ALSO significantly reduce carbon emissions from fossil fuels like oil and natural gas.

Canada is a Top 10 global polluter. To become carbon neutral in the next two or three decades means phasing out fossil fuels and taking advantage of the benefits that nature can provide.

Frankly, I am concerned that the reason there is increased attention on nature-based climate solutions is because climate activists have made progress targeting oil and gas, pipeline, and coal companies.

Yes to Two Billion Trees…done right. Yes to strong offset rules that don’t undermine climate action. And yes also to eliminating the production, use, and export of fossil fuels. The federal government can do all these things, and Environmental Defence will keep pushing them to do it right.