Home Depot, Lowe’s and Staples take action to protect their customers from PFAS and other harmful toxics lurking in carpets and office supplies

It’s been an exciting fall for people who want to see more action on toxic chemicals in consumer and household products. In the span of only six weeks, three retail giants, The Home Depot, Lowe’s and Staples, made major announcements on their commitment to phase out chemicals of concern such as non-stick chemicals known as PFAS, phthalates and bisphenols (such as BPA and BPS).

The three announcements came just weeks before we release the 2019 Who’s Minding the Store? retailer report card, an annual report led by the Mind the Store Campaign that benchmarks retailers on their safer chemicals policies and their progress in implementing them. The report will be released in mid-November.

Due to the absence of government regulation on toxic chemicals in consumer products, retail companies are forced to step up to remove toxics of concern from day-to-day consumer products in order to protect their customers. 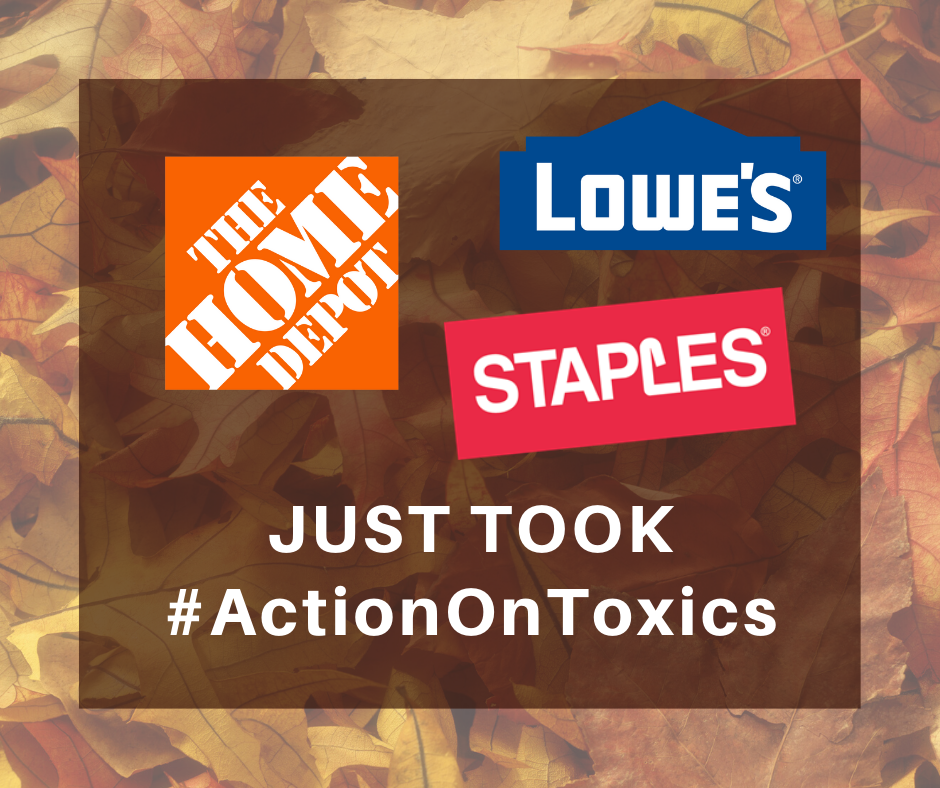 Here are short summaries of the Home Depot, Lowe’s and Staples announcements:

As the largest home improvement store in Canada and the world, we expect The Home Depot to be a leader when it comes to phasing out toxic chemicals from the products they sell. The Home Depot lived up to this expectation and was the first major retailer to announce that it will stop selling carpets and rugs containing per- and poly-fluoroalkyl substances (PFAS). These chemicals are added to carpets, rugs and other textiles to make them stain and water resistant (similar to the chemicals used to make non-stick cookware such as Teflon).

This is really good news because PFAS are extremely persistent in the environment – a characteristic that earned them the nickname “forever chemicals.” PFAS are also linked to cancer and reproductive health effects. Removing them from carpets and rugs will significantly lessen our and our kids’ exposure to these chemicals in our homes and will help prevent them from entering our waterways.

The details of the policy: The Home Depot will stop purchasing carpets and rugs treated with PFAS by December 31, 2019, after which the company will begin phasing out these products.

Similar to The Home Depot’s announcement, Lowe’s announced that it will phase out all residential carpets and rugs containing PFAS by the end of the year. Additionally, Lowe’s (which also owns stores under the Rona banner) also disclosed that all of its vinyl flooring is now free of phthalates and that wall-to-wall carpets sold at its stores are free of triclosan, phthalates, formaldehyde, heavy metals and vinyl chloride, among other chemicals of concern. The company’s chemical policy also addresses some toxic chemicals in paints and bee-harming neonic pesticides used for lawn and garden products.

In 2018, Lowe’s was the first company to commit to phasing out methylene chloride and N-Methyl-2-Pyrrolidone (NMP) from paint stripping products after a number of consumer and worker fatalities were reported in the U.S. from inhaling the fumes released by paint strippers.

The details of the policy: Lowe’s will stop purchasing indoor residential carpet and rugs containing PFAS by January 2020.

Just last week, Staples announced a new and comprehensive chemicals policy that will restrict many chemicals of concern including:

The details of the policy: The Staples Chemicals Policy will be informed by a Priority Chemicals of Concern List that will guide the areas on which the company will focus its efforts. The policy applies to “all product brands owned by Staples and to national brand products sold through U.S. Staples Business Advantage, staples.com, and Quill” and will be implemented in “a prioritized fashion based on product sales volumes, customer and other stakeholder concerns, the availability and feasibility of safer alternatives, and the latest scientific research,” according to the company.

These announcements represent just some of the hard-fought victories that resulted from years of advocacy by Environmental Defence and other groups, supported by people like you, to eliminate toxics in consumer products.