Poisoning the Well: How Bill 66 threatens our clean drinking water and invites Walkerton 2.0

We’ve got it pretty good here in Ontario. The vast majority of Ontarians can turn on their tap and rely on plenty of clean and safe drinking water. Most of us probably take it for granted that our water is safe to drink. We count on the fact that there are systems in place to protect our water, and our health. Unfortunately, with the introduction of Bill 66, those systems, and our ability to count on getting clean drinking water from our taps, are under serious threat.

This isn’t the first time we’ve had to take stock of how drinking water is protected in Ontario. The system we have today is the result of crises in the past – crises that may strike again, if Bill 66 passes.

Read more: ONTARIO’S ENVIRONMENTAL LAWS ARE UNDER ATTACK BY PREMIER DOUG FORD: WHY WE NEED TO COME TOGETHER TO STOP BILL 66

How the Walkerton Tragedy changed everything

For many Ontarians, the trauma of the Walkerton Tragedy is etched into our consciousness. In the year 2000, drinking water contaminated with E.coli poisoned an entire community. Over 2300 people fell ill and 7 people died as a result.  This tragedy was not a coincidence or a freak accident; a series of failures at multiple stages led to the incident.

A provincial public inquiry tasked with uncovering the cause of the tragedy found negligence on almost every level:  from failure to protect the water source which became contaminated, to the private drinking water testing facility, all the way to the provincial government. Ontario learned from the tragedy and the inquiry, and in the years that followed, the province got down to the serious business of making sure this never happened again.

Step one was the Safe Drinking Water Act, which set out new rules for water quality monitoring and new regulations, and set high standards for the water coming out of our taps.

Protecting water at the source

Step two was the Clean Water Act, passed in 2006. The law gave rise to a system where drinking water is protected from the source. The Act required the creation of nearly 40 source water protection plans which include all kinds of actions that will keep drinking water safe.

The plans are set by a local source protection committee, made up of experts, who customize them to the specific threats or risks in that location. For example, protection committees have identified risks such as fuel pipelines, excessive road salt application or industrial pollution and created actions to prevent contamination of drinking water sources nearby.

In essence, the Clean Water Act, and the protection plans it creates, helps ensure that we don’t end up with a polluting factory directly above a groundwater reservoir. 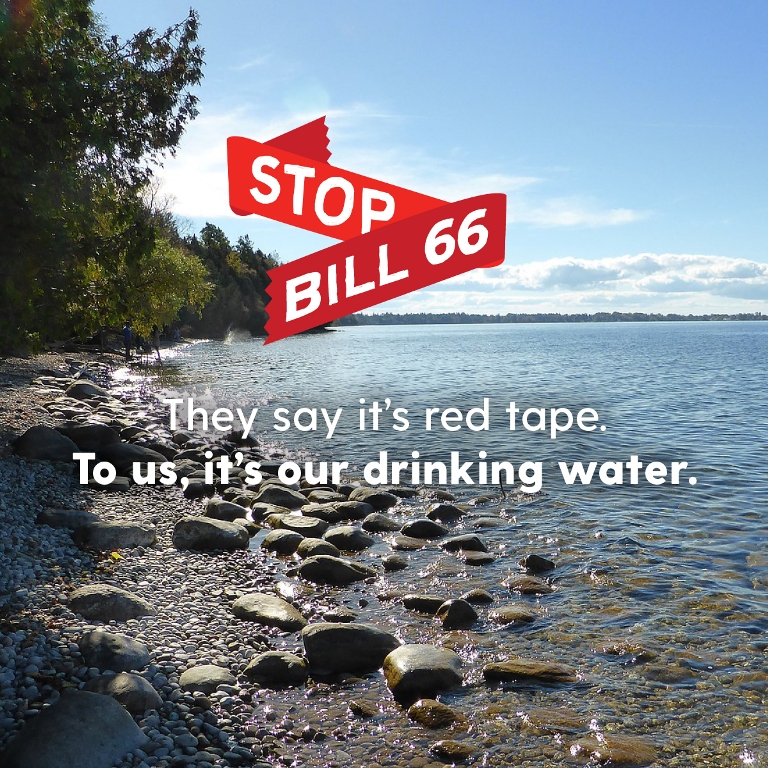 Bill 66 could change all this. Despite the provincial government’s promise to protect clean drinking water, Bill 66 introduces clear and significant threats to drinking water source protection.

Under Bill 66, municipalities with the Minister of Municipal Affairs’ approval would be able to pass special zoning by-laws that make new industrial developments exempt from a long list of environmental protections, including the Clean Water Act. Schedule 10 of Bill 66 clearly states that under this by-law, a project is exempt from complying with source protection plans and all their associated actions. The government has promised to protect our clean water, but Bill 66 sends an entirely different message.

Bill 66 quite clearly undermines the Clean Water act and all the progress Ontario made at protecting our drinking water from source to tap. It threatens the health of Ontarians. These protections were put in place for a reason. We cannot let the Walkerton Tragedy happen again; drinking water protection must not be undermined.

Take action by signing our petition, sharing it with your friends, and standing up for our clean drinking water.