As the 2018 Chair of the G7 group of developed economies, last weekend’s summit in Quebec was a big opportunity for Canada to demonstrate international climate leadership. I attended the summit along with water campaigner Ashley Wallis to get a front row seat as Canada negotiated with its G7 partners.

For a round up of how Canada brought four of its G7 partners on board for a landmark Plastics Charter, read Ashley’s blog here.

On climate, it was also a generally positive result. Canada stood up to the American President and negotiated a strong G7 commitment to climate action. But it was impossible to ignore the fact that Canada failed to make progress on the longstanding G7 commitment to phase out fossil fuel subsidies, just weeks after it decided to risk billions of dollars of public money on the leaky Kinder Morgan pipeline. 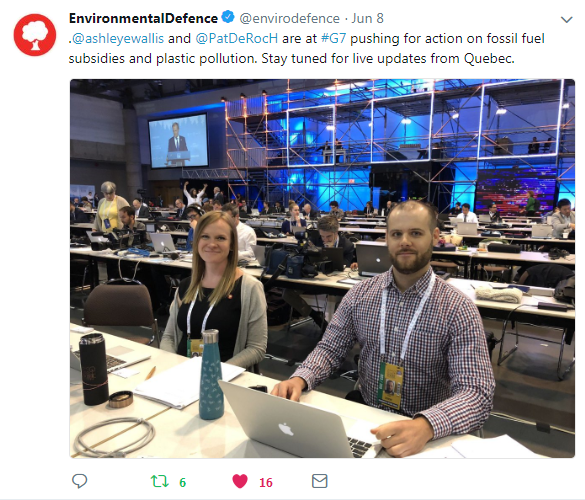 In the face of an obstructionist delegation from the United States, Canada worked with its other G7 partners to forge a strong commitment to climate action. On climate change, the summit’s final communiqué included:

Canada also announced it would invest $162 million to build strong and more resilient coasts and support clean energy in countries that are particularly vulnerable to climate change, like small island states in the Caribbean. Negotiating these climate outcomes was no easy task, and the federal government should be commended for its efforts.

But regrettably, Canada was not in a credible position to address “the world’s dumbest policy” and move forward on the G7 commitment to phase fossil fuel subsidies. Canada is the largest provider of government support for oil and gas production per unit of GDP in the G7. And its decision to spend billions of public dollars to buy the 65-year-old Kinder Morgan pipeline and financially back its expansion contradicts the G7 commitment to end fossil fuel subsidies by 2025.

After much stronger language in 2014, 2015 and 2016, this was the second year in a row that a G7 communique didn’t include a commitment to phase out fossil fuel subsidies. This disappointment is compounded by the Prime Minister’s statement that Canada must “find new solutions for the sustainable extraction and use of fossil fuels.” Canada should be enhancing its efforts to find climate solutions, not trying to build tar sands pipelines and looking for new ways to increase oil and gas production.

Canada must now turn its ambitious G7 climate commitments into tangible action at home. It must deliver more ambitious policies and programs to decarbonize its economy by mid-century, align climate action with its commitment to Indigenous rights and reconciliation, and ensure a just transition for the workers and communities that are most affected by the move away from oil, gas and coal.

Canada can start by releasing a detailed roadmap for ending subsidies to climate polluters and entering into a peer review agreement on fossil fuel subsidies with another large economy.