Making $42,000 per year? Oil companies pay a lower tax rate than you

A damning new report shows that some of Canada’s largest oil, gas and pipeline companies are using offshore tax havens to avoid paying their fair share of taxes. The use of tax havens creates a situation where tar sands and pipeline giants like Suncor, Canadian Natural Resources Ltd., TransCanada and Enbridge are paying lower tax rates than an Ontario citizen earning an income of $42,201 per year.

The report, from advocacy group Canadians for Tax Fairness, shows that the 60 biggest public companies on the Toronto Stock Exchange have over 1,000 subsidiaries (or related companies) in offshore tax havens. This means Canada’s federal and provincial governments are losing out on between $10 billion and $15 billion per year in revenues, leaving individual Canadians to pick up the slack.

Moreover, the report’s findings are likely an underestimation, as access to company tax data is limited due to secrecy and poor government transparency both in Canada and in the tax haven nations. These companies are not necessarily doing anything illegal, but the report shows that our corporate tax laws fail to prevent Canada’s biggest companies from using tax havens for tax avoidance.

Of the 60 corporate giants studied in the report, 11 are petroleum companies, including tar sands producers and pipeline giants. These 11 fossil fuel companies have a combined 46 subsidiaries and related companies in offshore tax havens.

The average Canadian corporate tax rate for large corporations is 26.5 per cent. But Canadians for Tax Fairness shows that the use of tax havens effectively allows big companies to pay a much lower rate. Over a ten-year period,

In comparison, an Ontarian making $42,201 per year – the province’s second lowest tax bracket—pays 24.15 per cent in combined federal-provincial income tax. Canada’s biggest polluters are using tax havens to avoid paying their fair share, while working-class families pick up the slack to pay for much-needed services like health care, education and infrastructure.

The use of tax havens by oil and gas companies is particularly egregious considering that they already receive $3.3 billion in fossil fuel subsidies from Canadian governments every year. Not only is the federal government allowing polluters to use offshore tax havens, it’s also subsidizing further oil and gas exploration and production. 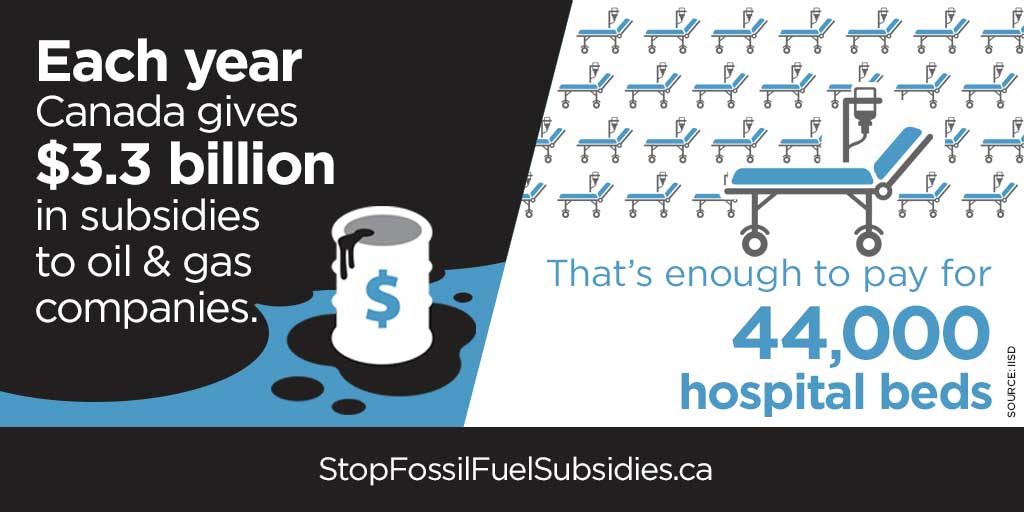 Canadians for Tax Fairness has a number of recommendations to clamp down on corporate use of offshore tax havens, including measuring the tax gap, renegotiating tax treaties, stepping up enforcement of tax dodging, and updating tax avoidance laws.

But our government can start clamping down on preferential tax treatment for oil and gas companies in particular by phasing out fossil fuel subsidies.