Last week, the Alberta Energy Regular (AER) made a terrible decision that bowed to corporate power rather than protecting the environment and the public good.

Here’s what happened: the AER approved Suncor’s embarrassingly weak tailings management plan. The approval allows the oil giant to shirk its full responsibility for the impact its toxic tailings ponds have on the Alberta landscape, rivers and streams, and citizens that depend on these. It also means the liability for the massive cleanup continues to pile up on Alberta taxpayers.

The stated objective of the Alberta government’s Tailings Management Framework is for tar sands companies to treat its tailings and reclaim the landscape over the life of a project. But the rules were created to be “flexible,” allowing companies themselves to propose how the tailings ponds would be treated, how progress would be evaluated, and the timeline for full reclamation.

So how is Suncor proposing to manage its tailings? The company’s plan relies heavily on water capping—an unproven and risky approach. That involves putting toxic tailings in mined-out pits, covering them with water, and hoping that the heavier tailings sink to the bottom and stay there in perpetuity, and that the covered tailings have no impact ever on wildlife, ecosystems, or people. The AER itself characterized this approach as “high risk.”

Suncor also put forward weak criteria for determining whether the “treatment” is effective or sufficient. The oil giant is essentially saying “trust us” after 50 years of negligible progress on tailings.

And the timelines are so long that there is no guarantee that tailings will be dealt with after its tar sands mine closes in 15 years. In fact, Suncor is saying certain tailings deposits will not be certified as reclaimed for 70 years after its operations cease.

Indigenous groups and environmental organizations assessed Suncor’s management plan and called it inadequate. They then proposed ways to have better management and oversight, actual contingency plans in the event that Suncor’s plan doesn’t work, and much shorter timelines to reclaim the landscape. The AER rejected those proposals. Instead, as part of their approval, the AER asked Suncor for more research, more information, and more plans. Essentially, after 50 years of tar sands development, a decision to finally deal with toxic tailings was once again punted to some later date.

If approval of the Suncor plan is any indication, tailings management as a whole in Alberta will get worse before it gets better. The volume of tailings produced already is over 1 trillion litres, and is expected to continue to grow for 20 more years, reaching 1.5 trillion litres in 2037. 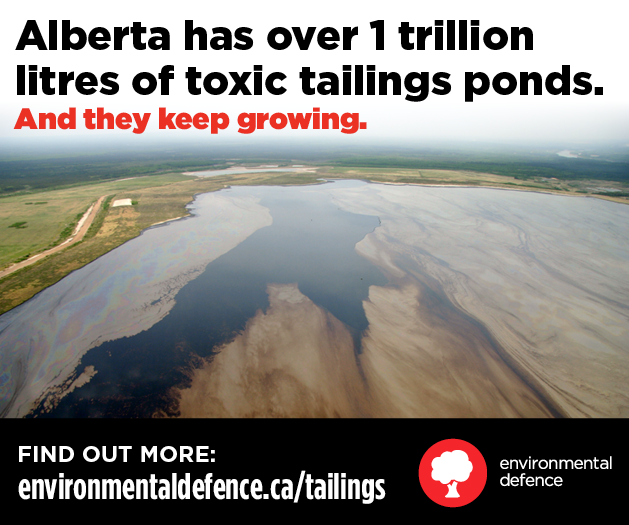 The cost of that liability has been estimated at over $40 billion. And it is growing more quickly than royalties collected by the Alberta government for tar sands development. Meanwhile, the program that is supposed to collect funds from tar sands companies to ensure that the cost of cleanup efforts are covered, has less than $2 billion in it – about 4 per cent of the clean-up costs. The remaining 96 per cent is the potential liability that the Alberta government and, by extension, the Alberta people, now face.

The Alberta government should take the following actions that are in line with the serious issues created by tailings and their toxic legacy. It should:

Unless the Alberta government takes these steps, Albertans will be left holding the bag both for the clean-up costs and for the health impacts of these toxic tailings ponds.