Why electric vehicles will rule the world 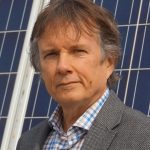 This is a guest blog by Michael Brigham,  president and co-founder of SolarShare, Canada’s leading renewable energy co-operative.

I have been involved in the renewable energy field since the mid-1980s – not long after Ronald Reagan tried to symbolically bury the nascent industry by removing the solar panels that Jimmy Carter had installed on the White House.

A lot of things have changed since then. Renewable energy has moved into the mainstream and is now competing head-to-head with fossil fuels for investment in the production of electricity. This change was originally driven by climate change policies, but has since accelerated rapidly due to technological innovation that has increased the efficiency of renewable energy and massively decreased its costs.

However, the ways we get ourselves from point A to B are still dominated by fossil fuel use.  Planes, trains, and especially automobiles, all use kerosene, diesel and gasoline. This is because electrification of transportation has been, until recently, restricted to a narrow set of uses due to restrictions around how much energy their battery could hold. When thinking of electric vehicles, fork trucks, golf carts and electric assist bicycles come to mind, but not your family hauler. People want and need their electric cars to do the same things as their gas cars and most won’t switch until they do. But electrification of the transportation sector offers one of the largest greenhouse gas emissions reductions potential, and it’s one that is now within reach of the general public.

Fortunately, I am a guy that likes to be on the edge of new ideas, especially in the smarter and more efficient use of energy. That’s why I was keen to buy the new Chevy Volt when it first became available in 2012. I was intrigued by this mainstream production vehicle that had real electric range. My Volt can go 40- 65 km on a charge (65 in the summer and 40 in the winter, when a portion of the electricity goes to heat the cabin) and has plenty of passenger comfort, rabbit quick (for a family car) acceleration, great road stability and a design that is pleasing, if not truly innovative. Of course it also compensates for its modest electric range by housing an on-board gasoline generator that kicks in as the battery runs down. This gives me the same total range as a conventional gas-only car (about 680 km), thus completely eliminating the chief concern amongst potential Electric Vehicle (EV) buyers:  “range anxiety” or “will I make it to where I need to go without running out of juice?” I have found that for most of my trips in the city, the gas engine is never required before I am back at the charger in my garage. Also, the combination of electric and gas driving means my lifetime gas consumption is pretty impressive at 3.4 l/100 km.

Given this positive experience, you can imagine I was pretty excited when I heard Chevy was poised to release the “Bolt”, a pure EV that would carry 5 people in comfort, yet have over six times the range of the Volt in purely electric mode! I read a number of online driver reviews, then immediately went the dealer and ordered one. I can now share my experiences over the past couple of months of ownership.

Most importantly, the 380 km range is really possible under the right conditions (more about that later). This means that I can get to and from the many places I travel across southern Ontario without having to locate the still-too-rare fast charging stations that I can use to recharge in about 30 to 90 minutes depending on how much of a top-up is required. The car is also a fully new design and incorporates key energy saving features such as the most efficient engine-based regenerative braking available. It is like using the normal brake pedal, but instead of burning up energy as heat on the brake pads, it spins the electric motors backward and sends that energy to the battery, thus efficiently extending your range, while avoiding wear to the conventional brakes. If you are an energy nerd, you can also watch all of this happen in real time and see how the car is rating your driving style via a 10” tablet style display screen. This screen also displays other energy use features and statistics and is the user interface for phone, stereo, climate control etc.

Fuel cost-wise, overnight charging at the current nighttime electricity rates here in Toronto of 7.7 cents per kilowatt hour, the Bolt’s 60 kWh battery costs $4.62 to “fill”. This will soon become free once the province gets its free over-night charging program operating.

On the performance side, driving the Bolt is like driving a running shoe attached to an elastic band. Acceleration is instant, continuous and pushes you back into your seat with a startling g-force. An electric motor doesn’t have to “rev up” to achieve full power like an internal combustion engine, it has full power on tap instantly at any RPM and this is one of the fun factors of driving an EV. It took me a little while to get used to it, accidentally squealing the tires when the lights turned green several times, but power does equal fun, and the Bolt doesn’t disappoint!

Passenger convenience and comfort is similar to other mid-range vehicle offerings from mainstream automakers. Mine has heated front and rear seats, heated steering wheel, fully wraparound video cameras (including a funky computer-derived from-above view that is great for tight spaces), auto-leveling headlights, front and side collision alert, onboard 4G WiFi, a wide angle rear view camera screen built into the rear view mirror, lane keep assist, DC fast charging capability, electric windows, air conditioning and self-sealing tires. It also has a constantly upgraded display of your total kilometres of driving range remaining under three scenarios; most optimistic, most likely and most pessimistic. The car constantly updates the estimated range remaining with a bar graph that gives you a constant trend analysis. To their credit, GM has avoided the temptation to give the driver optimistic estimates of remaining kilometres. The estimates have been amazingly accurate in my experience thus far, and other owner reports which I’ve read online tend to confirm this.

How realistic is the quoted 380 km range? Well, that depends on a number of factors including your driving style, the speed you are travelling, outside air temperature, whether you need cabin heat or air conditioning, how constant is your speed and the terrain. By far the biggest influence of these, is travelling in very cold weather when a lot of electricity is consumed to heat the cabin. This can reduce your range by up to about 30% and on longer trips definitely needs to be accounted for. If you drive a lot for your job and must cover great distances in a day, this probably isn’t the most practical car for you. For the other 90% of us, however, this range is more than adequate.

A very important EV ownership benefit is a future without oil changes, tune-ups or the need to replace mufflers, radiators, air filters, fan belts or the like. Bolts don’t have them! When reading the Owner’s manual and I first saw the Bolt maintenance schedule, I was shocked. Other than periodic tire rotations and replacing the cabin air filter (an easy do-it-yourself 3 minute job), the first real dealer visit isn’t needed until 250,000 km, and even then only for a change of the battery coolant fluid! As well, with the Bolt’s highly effective regen braking system, it is possible that one may never need to replace the conventional brake pads or discs. Nice!

I also like the hatchback and fold down rear seat and flat floor which gives tons of storage space and plenty of passenger leg room. I even had Tim Gray, Environmental Defence’s 6’2” executive director in the back seat with lots of clearance between his long legs and the back of the front seat.

Overall the car is great and now I am contemplating selling my beloved Volt. The only thing that makes me hesitate is the still-incomplete charging network. I don’t mind stopping for a 60 minute re-charge to get me another 250 km but I need to know that when I need to that, I will be able to find one. Progress is being made however, and the CAA indicates that there are currently 208 charging stations in 96 locations in Ontario and most of these are in the GTHA. Also both the Ontario and Federal governments are promising more stations in the near future as part of their climate change plans. Ontario alone has plans for 500 charging stations, many of which are either now complete or under construction.

On the price side, the Bolt is slotted into the mid price range, close to that of a BMW 3 series. I purchased my premium edition fully loaded with all the options available including freight, dealer admin and taxes for $45k after the Ontario rebate (about $5k less for the base model with fewer options). This is huge price drop compared to the Tesla Models S or X, the only other EVs with similar range and features.

Many automotive commentators, and more than a few oil industry executives, have downplayed the impact that the electric car will have on fossil fuel use. Many predict a very slow increase in their electric vehicle use with less than 15% of new car sales being electric by 2030. I, and a growing number of industry analysts, think that they are wrong and that the adoption rates of EVs are more likely to be like smart phones than other typical innovations. The reasons are pretty simple. EVs are better cars, more simply built with fewer systems to fail. They are very cheap or free to fuel, have dynamic acceleration and handling and a range that is fast approaching gas powered cars.

I am sold and I bet you will soon be too. Try a test drive if you can, and you be the judge. If fact, the new Electric Vehicle Discovery Centre in north Toronto gives you the opportunity to get in and test drive a variety of electric cars. So, what are you waiting for?