Who doesn’t love an opportunity to help the environment while drinking a delicious chilled beverage at the same time? A group of students in Calgary, Alberta gave folks this opportunity by making and selling insulated cup cozies made from recycled plastic bags, and donating their proceeds to Environmental Defence.  Check out this awesome video they made about the project. 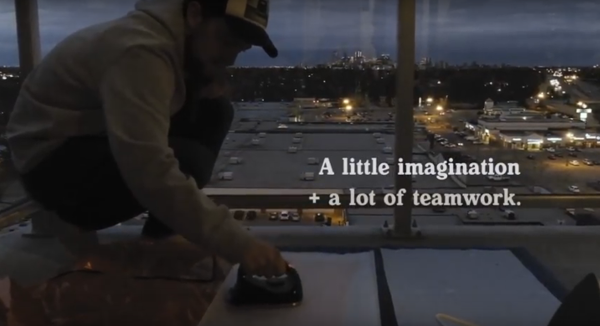 Robyn Atkinson, Jesse McLean, Gabrielle Wiltse, Evan Stark, and Taylor Billinton are students in an entrepreneurship class at Mount Royal University. For an assignment, they were challenged to create a product using plastic bags and playing cards. They had 10 days to create their product and produce a video about their project.

During the process, as they ground up their materials to create insulation for their cup cozies, they were reminded of the millions of particles of plastic found in bodies of water all over the world. So as they approached family, friends, and strangers on the street to sell their creative cup cozies made from recycled plastic bags, they spoke about plastic pollution to get folks thinking about where all this plastic ends up. And, wanting to make a lasting impact, they chose to donate their proceeds to Environmental Defence in support of our work safeguarding Canada’s freshwater.

You can join Environmental Defence in calling on Ontario to adopt a deposit return program for plastic bottles (similar to the deposit return program Ontario already has for wine and beer bottles). This type of program has significantly increased recycling rates in other Canadian provinces and territories, while effectively reducing the number of plastic bottles that end up in our lakes and landfills. Environmental Defence is asking that funds generated by the program (from unclaimed deposits) be used towards protection of the Great Lakes. Make your voice heard today. You can also help protect Canada’s freshwater by making a donation in support of our work.

Congratulations Robyn, Jesse, Gabrielle, Evan, and Taylor on a successful project and for finding a creative way to start conversations about plastic pollution. And, thank you for your generous support of Environmental Defence.

If you are 11-18 years-old and want to investigate more solutions to plastic pollution, check out Environmental Defence’s Young Reporters for the Environment (YRE) National Eco-journalism Competition for a chance to be published by Alternatives Journal Magazine.