Getting FIT: How Ontario Became a Green Energy Leader

With the new climate change law just passed, and a climate action plan expected in the weeks ahead, Ontario is stepping forward, and showing a real commitment to fight climate change and shift the province toward a low-carbon, clean economy. 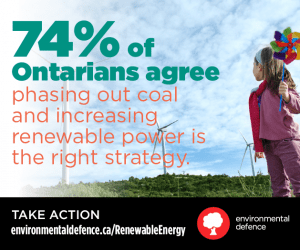 It’s a direction Ontarians support – as highlighted in our new report released today: Getting FIT: How Ontario became a green energy leader and why it needs to stay the course.

In 2009, Ontario passed the Green Energy and Green Economy Act. The goal of the Act, and its signature policy – a Feed-in Tariff (FIT) – was not only to expand renewable energy generation, but to seed a new industry in a province that faced a steady decline in manufacturing jobs. Ontario looked to the experiences of countries like Germany and Denmark that had become clean energy powerhouses, and made a leap to join the clean energy race.

To hear pundits tell it, the policy was controversial. But in reality, while there may be a small and vocal constituency of people who dislike green energy, the vast majority of Ontarians support the move to wind and solar power and want to see more renewables in Ontario’s future.

Polling commissioned by Environmental Defence, in a report released today, found that 74 per cent of Ontarians support the province’s move away from coal and towards renewable energy, and 81 per cent want to see Ontario generate more power from renewable sources. (Do you want to see more green energy in Ontario? Take action here.) 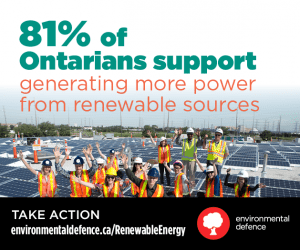 The report, Getting FIT: How Ontario Became a Green Energy Leader and Why it Needs to Stay the Course, tells us why: Despite some challenges, the policy delivered on its promises.

The Green Energy Act stimulated the creation of tens of thousands of jobs, inspired dozens of renewable energy manufacturing facilities to open up shop in Ontario, recruited billions of dollars in investments in wind and solar power, and provided an opportunity for municipalities, schools, faith communities, First Nations, farmers and just about anyone with an interest to participate in the green energy revolution.

As renewable energy undergoes explosive growth globally, and U.S. states and Canadian provinces now look to follow Ontario’s lead and replace their coal fleets with clean renewable power, Ontario is in a position to meet the growing demand for green energy. In other words, Ontario can export its clean power, technology and know-how to a growing market in North America and abroad.

But in order to do so, Ontario must recommit to the green power industry this province successfully seeded. Right now, the provincial Long Term Energy Plan would have Ontario stop building wind and solar power by 2021. Thankfully, that plan is up for review over the coming year. It needs to change.

More green energy will help support tens of thousands of people now employed in green energy in Ontario. And it will enable emissions from the electricity sector to continue their decade-long decline, instead of grow as a result of increased use of natural gas as currently planned. Yes, gas is cleaner than coal, but no matter how you slice it, gas is a fossil fuel and it contributes to climate change.

The report makes a series of recommendation for how Ontario can lend continued support to the renewable energy industry. The recipe is pretty simple: sustain domestic demand for clean power, develop an export strategy to capture a larger share of the global opportunity, commit to reducing emissions and phasing out gas, and give Ontarians more information so we can better understand our choices.

As the report shows, the Green Energy and Green Economy Act is an example of how environmental policy and economic policy can go hand in hand. It’s the story of how this province cut emissions, created jobs, gave people an opportunity to generate, and get paid for, green energy, and captured a share of one of the largest economic opportunities out there. Moreover, it’s popular.

Green energy in Ontario is a good news story. Our new report tells us why.

Want to see Ontario continue to invest in renewable energy? Make your voice heard today by signing this petition.