This morning, Ontario passed the Climate Change Mitigation and Low-carbon Economy Act. This is a big deal. 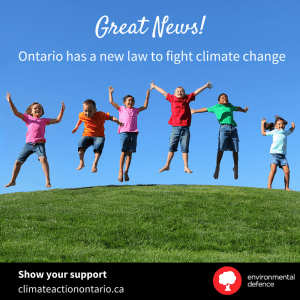 Most Canadian provinces have targets and plans intended to reduce greenhouse gas (GHGs) emissions, but few are as ambitious and comprehensive as Ontario’s.

The new law will put Ontario on track for dramatic emissions reductions, and aim to largely decarbonise our economy by mid-century, which is what’s needed if we hope to avoid run-away climate change.

We’re proud to report that Environmental Defence has played a role in supporting the province of Ontario in reaching this historic milestone.

Here are some of the highlights of the new legislation:

The law’s not perfect. For example, many of Ontario’s industries are getting big breaks. This is meant as a transitional measure to ease concerns about competitiveness, and it’ll be important to ensure this transition occurs in a timely manner. And it would also be good to have an independent body to oversee the use of the revenues and to make suggestions as to how Ontario can and should reduce emissions to ensure that evidence, not politics, guides decision making.

Which is to say, we’ll have work to do in the years ahead to make sure Ontario is in fact on track to reach its targets and that it is using the revenues from cap-and-trade wisely.

But the law passed today is a huge step forward, and one worthy of celebration.

Canadian politicians have developed a bad habit of setting targets but then doing too little to reach them. Ontario is an exception. The province hit its 2014 GHG target and with this new law, appears committed to reaching future targets too.

Show your support for bold climate action and building a clean economy in Ontario.