“Think about it. Why would you make something that you’re going to use for a few minutes out of a material that’s basically going to last forever, and you’re just going to throw it away. What’s up with that?”

Single use plastics typically have a lifespan of less than a day yet they will remain on our planet almost forever. Toronto consumes an estimated 100 million plastic bottles a year, 35% of which are not recycled (York University par. 3). Many plastic bottles still end up in landfills, or worse, as litter in forests, lakes and oceans. At Emily Carr Secondary School alone, approximately 82 percent of students consume at least one plastic water bottle a week. Most of these plastic bottles are not disposed of properly as one would hope, but left in garbage bins, classrooms and even in the middle of the hallways. The ignorance that students display towards how their plastic bottles are produced and what happens after the bottles are used is reason enough to implement a plastic reduction campaign at ECSS. Although plastic bottles are a very small and specific component of plastic pollution, it is also an issue of significant magnitude within the community, In addition to this, it is a reasonable goal to target plastic water bottle pollution at Emily Carr which is why it should be the first step in introducing students to a more sustainable way of living. Using sustainable practises and ensuring the availability of resources is a responsibility we owe to future generations. Society can only sustain our growing populations for so long if we continue to pollute the atmosphere with fossil fuels to make plastic bottles is ridiculous when in it much simpler and cheaper to ddrink tap water.

Taking measures at Emily Carr Secondary School, such as installing water bottle filling stations and educating students on plastic pollution, will ensure that an effort is made to reduce plastic waste. 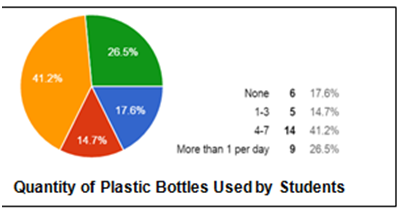 In a typical high school in Woodbridge it can be expected that one in two students in every classroom is carrying  a plastic beverage container with them, or has at least used one that day. If every Emily Carr student purchased one plastic water bottle each week, the number of plastic bottles would exceed sixty thousand. This estimate represents the best possible situation, as it operates under the assumption that students only consume one water bottle per week, and ignores the existence of other plastic beverage containers. All the while, it is safe to assume that the water fountains located in the school remain relatively untouched. Unfortunately, one is more likely to find students spitting their gum in the water fountains than drinking from them, because 39 percent of students refuse to use the fountains based on the belief that the water is unsanitary. In order to change student perception of the water available to them at school, we must change the method of delivery so that it appeals to the student body. Installing a water bottle filling station at Emily Carr would provide a new incentive for drinking the fountain water what with its sleeker design. The first filling station to be installed would be located in front on the gymnasium where it will receive optimal use from phys. ed. students. The station is equipped with a water fountain from which students can drink from and a filling station to fill water bottles. The component that makes this technology unique is the counter that tracks the number of plastic bottles diverted from landfills, which will serve to acknowledge students of their efforts to make environmentally conscious decisions. In addition to the filling station, other aspects of the campaign would include providing students with a reusable water bottle, and continuing this tradition for the new generations of grade nine students. Over the past couple years, the number of grade nine students entering Emily Carr had only increased. By providing a large group of students with reusable beverage containers, we would give the impression of a school that enforces a sustainable lifestyle. This would encourage students to do the same, and have a domino effect on the community. Currently, over eight hundred and twenty five plastic bottles were collected by Emily Carr students and caretaking staff to show the extent of plastic bottle pollution created. What is more significant is that this only represents a fraction of plastic bottles used by students. After the filling station is installed, another round of plastic bottle collection will take place in order to track our school’s progress and examine what aspects of the campaign must be improved upon. The key to this campaign is that it will be ongoing and will not be complete by the end of the school year. By distributing reusable water bottles to current and new generations of Emily Carr students, the issue will be fresh in the students’ minds and will ensure that they consider the impacts of plastic pollution. By continuously assessing the schools progress in reducing plastic pollution and informing the students, we will inspire cooperation in the initiative as well, therefore educating the students on easy changes they can make to their lifestyles.

Water bottle filling stations have been installed at schools within the York Region District School Board such as Bill Crothers, Milliken Mills and Tommy Douglas Secondary Schools. In order not to be left behind in the pursuit of improving the sustainability of student habits and communicating the importance of environmental issues, it is essential that Emily Carr acts accordingly. However, despite the leaps and bounds made by other schools in reducing plastic pollution, there has not been a visible change. At Milliken Mills High School, caretaking staff has not noticed any reduction of plastic water bottle waste created by students and at Tommy Douglas, just as many students carry plastic water bottles as at Emily Carr. This does not mean that the water bottle filling stations should be considered a waste; one filling station at Tommy Douglas Secondary School sees more use than all the water fountains at Emily Carr combined. What should be assessed when examining the success of other high schools in eliminating plastic waste is that no other measures were taken to educate students. In order to improve upon the practices of other schools, it is imperative that any plastic reduction campaign operate on multiple levels. If the 74 percent of students who are already willing to drink tap water would use reusable water bottles instead of paying 2000 times more for bottled water (“The Story of Bottled Water”), Emily Carr would see a visible change in plastic waste reduction.