In our work to stop the proposed Energy East pipeline proposal, I find myself mired in details about spill rates, the properties of diluted bitumen, climate impacts, and threatened water sources.

In thinking about those details, it’s easy to lose sight of the people who live along the proposed route.  Photographer Robert Van Waarden recognized this challenge and in the summer of 2014, he travelled the length of the Energy East proposal from Hardisty, Alberta to Saint John, New Brunswick, taking moving portraits and putting real faces on the Energy East proposal. 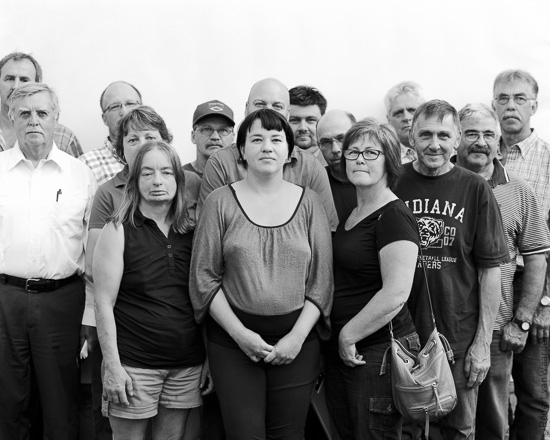 This year, a selection of these photos was placed in an eye-catching outdoor exhibit titled ‘Along the Pipeline that is travelling back along the proposed pipeline route.  After touring across Quebec this spring, the Ontario leg kicked-off in Ottawa last month and will soon be shown in Kenora, Shoal Lake, Thunder Bay and ultimately Toronto.

Award –winning photographer Robert Van Waarden created powerful black and white portraits of people in a variety of locations, with a diversity of cultural backgrounds, employment situations, ages, and opinions on the pipeline:“Through this work I hope to demonstrate the strength of individuals and communities, what they value and how this project will have far reaching implications. By leveraging the power of visual storytelling we can bring people from all over Canada to the front lines of this issue.”

The photo outdoor exhibit features a Zimbabwean refugee who works in the tar sands, a rancher, a medicine man, a student, a real estate agent, and a lobster fisherman among others impacted by the pipeline project.

The Ontarians featured in ‘Along the Pipeline’ exemplify the complexity of this issue. They include Dick Tolton, a Kenora ice truck driver who made the choice to abandon his well-paying job in the oil patch because of the destruction it could cause to his well-loved Lake of the Woods.

Also in the exhibit is Elizabeth Frazer, a retired United Church minister from North Bay. For her, the main issue is the climate impact these pipelines facilitate through the expansion of the tar sands.

Mayor Keith Hobbs of Thunder Bay is also featured. He has been outspoken on the project, just recently expression serious concerns after the release of the Ontario Energy Board’s report on Energy East, which found that the risks of the project outweigh the benefits.

“It is just a lot of stuff to take in, being at this age and having to go through all this….the great spirit gave this land to us. We have to take care of it, we have to treat it the way that it treats us.”

Meeting these people through the Along the Pipeline exhibit helps us grasp the scale of a project so massive, that it could put hundreds of communities in harm’s way.

The next stop of the tour is Kenora, where the exhibit will be on display from September 3-8th. You can see some of the images and hear interviews online here: http://alongthepipeline.com/

Information on future dates will be updated at www.rejectenergyeast.ca.

What’s in store for 2020? Here are our predictions for next year’s biggest environmental news stories

Why Ontario needs to get serious about climate change

My trip to Florida in an electric vehicle